Artist and author Nancy Hungerford has pieced together this dynamic account from her husband’s logs and journals, giving readers an emotive experience of a pilot’s view of war.

Robert Hungerford was born in Detroit in 1921, having a happy childhood that included  bicycle visits with a friend to the nearby airport where they “inspected” the planes close up. For young Bobby, this engendered his desire to one day become, not a cowboy as his friends aspired to be, but an aviator. The Great Depression wrought major changes in his home life but he managed to be accepted for college, and from there, to join a civilian pilot training that had its inception with rumors of war building in Europe. With

the attack on Pearl Harbor in 1944, the need for pilots became critical, and Hungerford was able to join the Navy, take training and earn his wings. It was not always easy; he made flying mistakes, and had to accept the loss of his youthful sweetheart who didn’t wish to become an early widow. He also made friends, learned new accents and came to see the value of comradeship as he flew legendary Grumman Hellcats with the equally famed Fighting Squadron Thirteen, on one of the war’s greatest battleships, the USS Franklin. About a third of his squadron would be lost in the war years, through mechanical failures and even friendly fire, and he had to learn to stow away his thoughts about the war, finding solace in letter and journal writing.

Nancy Hungerford drew on Robert’s writings to create this book over the course of more than ten years. She has done an admirable wordsmith’s job of “being” the book’s hero and seeing his circumstances as he did. Included are many technical details of flying— advanced turns, slips, wingovers, chandelles, circle slips and the like—along with descriptions of the aircraft he flew and the sensation of, for example, being catapulted in his plane from the ship’s deck instead of the standard takeoff, and learning to land again on that deck that looked like a postage stamp from the air. Hungerford is equally adept at melding Robert’s personal life into the tales of war, most especially recalling the pride of his parents at his success as a Naval aviator. The author, through Robert’s perspective, opines: “War is a chain of unfortunate, unexpected tragedies and, in some cases, death, which could happen at complete random.” In showing, by contrast, the spirit and determination of one young man in the face of such often-horrific events, she offers a highly readable, inspiring biography.

Nancy Hungerford’s work can be appreciated by older readers who lived through those times and by younger people with interest in and aspirations to a higher, sky-level, calling.

An inspirational, in-depth look at a boy’s dreams which led to him becoming a naval aviator. A book well worth the read.

This was a thoroughly entertaining read. From personal insight to the technical aspects of flying and war, it became a complete picture of his fulfillment of his childhood dreams. A must read for any veteran, family of a veteran or history buff. It paints a personal picture of life and growing up during wartime.

The voice of Robert Hungerford comes in as a clear example of the “Greatest generation.” Never do we, the reader, expect so clear a voice. The fact that it is told in the first person singular underscores the importance and immediacy.

As we travail through the training of a navy aviator and listen to his developing love affair with flying the “Hellcat,” his plane the reader is drawn into an alien world, “a place where fear, bred anxiety, anxiety eroded skill and skill battled vertigo.”

I recommend this book highly, a must read for those to seek understanding of the “Greatest Generation” and the author disguises herself a “ little I “in the final chapters. Well Done!

Based on pilot Robert Hungerford’s journals and personal recollections, “Well Done” contains enough detail about his training as a Navy pilot in WWII and his sometimes hellish missions in the Pacific to satisfy any history buff. But it’s also a very personal story of a man who comes across as frank but modest, dismissing his own bravery with a sense of humor. He makes his mistakes – like one disastrous blind date! – into jokes. He talks about his boyhood dream of flying, but is dead serious about mastering the skill—and surviving to live a long, rich life after the war. There are some fine period photos as well. A warm, compelling story.

A WWII MEMOIR – FROM CHILDHOOD DREAMS TO NAVAL AVIATOR

We follow a boy’s passion for flying to become one of the unsung heroes of World War II—his extensive flight training, earning navy wings of gold, being an aviator aboard the USS Franklin in the Pacific theater, deaths of friends, destruction of his ship while being the agent of destruction of the enemy (a toll he keeps to himself), the eye-opening July 4 mission, being hit, returning safely to the Franklin, only to fly two more missions that day. A must read. — John Holzapfel, past Southold Town trustee, past Oysterponds Historical Society president, educator
Order the Book - $17.99 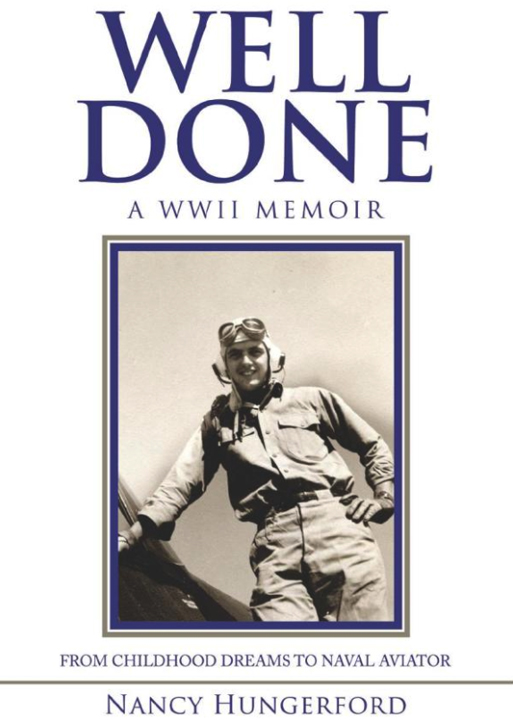 We will not sell or rent your information to anyone else.